The Natural Park of Moroços is located practically

The area of Moroços contains important resources, particularly wild plant breeding animals that are widely used in diversified areas, such as the feeding of man and cattle (goats, cattle, cattle, etc.) and the cure of various diseases.

The minimum altitude of the park is approximately 400 meters in the area of Xôxô and the maximum altitude corresponds to the Peak of the Cross with 1585 meters. It has a great diversity of plant species, many of them endemic, and has been one of the most diverse centers of endemic plant species in the entire Cape Verde archipelago. 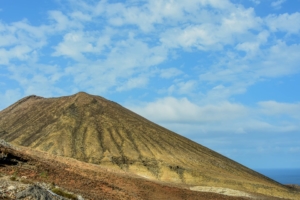 Tope de Coroa lies in the northwestern part of the island of Santo Antão, is a volcanic cone with 1980 m, which represents the highest point of the island. It has potential for nature tourism.

This protected area is the only representative sample of ecosystems of volcanic cones on the island of Santo Antão. It has a relatively high percentage (61%) of endemic species of Cape Verde, of which 25% are on the Red List of Cape Verde and Santo Antão.

It was classified in 2003 as a Nature Reserve and was later classified as Marine Nature Park in 2014. It is located in the municipality of Ribeira Grande and has a total area of 10055 ha, of which 2976 ha in land.

Cruzinha is the only representative sample of ecosystems of coastal zones of the island of Santo Antão. It owns 16% of endemic species of plants of Cape Verde. Presence of paleodunas and mobile dunes, reason for studies of many tourists and scholars that pass by.